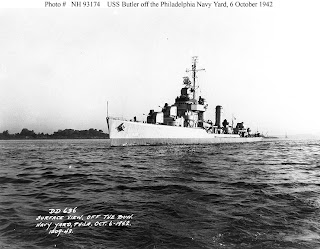 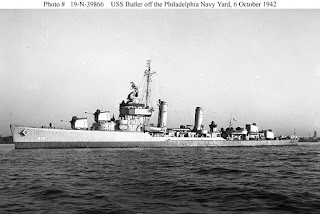 Figure 2:  USS Butler (DD-636) off the Philadelphia Navy Yard, Philadelphia, Pennsylvania, 6 October 1942.  Photograph from the Bureau of Ships Collection in the US National Archives. 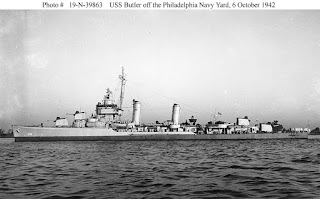 Figure 3:  USS Butler (DD-636) off the Philadelphia Navy Yard, Philadelphia, Pennsylvania, 6 October 1942. Photograph from the Bureau of Ships Collection in the US National Archives. 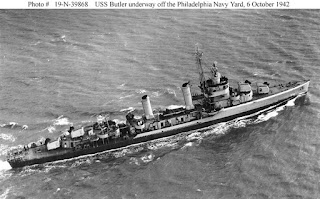 Figure 4:  USS Butler (DD-636) off the Philadelphia Navy Yard, Philadelphia, Pennsylvania, 6 October 1942. Photograph from the Bureau of Ships Collection in the US National Archives. 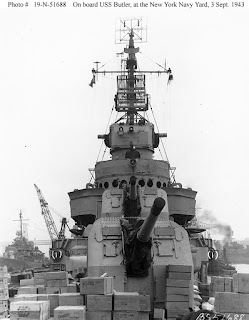 Figure 5:  View on board USS Butler (DD-636) looking aft toward the ship's forward 5-inch guns and pilothouse, with supplies piled on deck in the foreground. Taken at the New York Navy Yard, New York, 3 September 1943. Photograph from the Bureau of Ships Collection in the US National Archives. 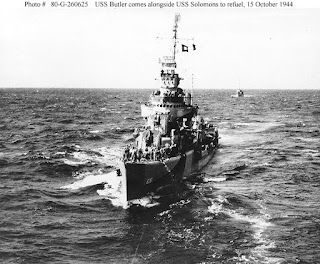 Figure 6:  USS Butler (DD-636) comes alongside USS Solomons (CVE-67) to refuel, 15 October 1944. She is painted in Camouflage Measure 32, Design 3D. Official US Navy Photograph, now in the collections of the National Archives.

Named after the famous US Marine Corps Major General Smedley D. Butler (1881-1940), the 1,630-ton USS Butler (DD-636) was a Gleaves class destroyer that was built by the Philadelphia Navy Yard at Philadelphia, Pennsylvania, and was commissioned on 15 August 1942. The ship was approximately 348 feet long and 36 feet wide, had a top speed of 35 knots, and had a crew of 276 officers and men. Butler was armed with four 5-inch guns, six 0.5-inch machine guns, ten 21-inch torpedo tubes, and depth charges.
After completing her shakedown cruise, Butler escorted convoys in the Atlantic and in the Gulf of Mexico. On 14 January 1943, Butler left the United States and steamed to Casablanca, Morocco, and from there went to Dakar, French West Africa. The destroyer then escorted two Free French warships (the Richelieu and the Montcalm) from Dakar to New York City. After undergoing an overhaul in New York, Butler left for the Mediterranean on 8 June. After participating in some training exercises off Oran and Algiers, Butler went to Bizerte, Tunisia, where she joined the amphibious assault force for the invasion of Sicily, which took place from 9 July to 12 August. Butler took part in the pre-invasion bombardment of Gela, Sicily, and subsequently served on escort duty for the rest of the invasion. Butler then returned to New York, arriving there on 22 August.
Butler was again assigned to convoy escort duty until 5 May 1944. At that point, the ship was sent to England to participate in the invasion of Normandy, France. Butler remained with the invasion force from D-Day, 6 June 1944, to15 July. She screened heavy warships in the invasion force’s bombardment group and provided inshore fire support on D-Day. Then from 12 to 30 August 1944, Butler escorted British escort carriers taking part in the invasion of southern France. Shortly after that, the ship returned to New York for another overhaul.
After escorting a convoy to Marseilles, France, in early October 1944, Butler returned to New York on 27 October for conversion into a high-speed minesweeper. Re-classified DMS-29 on 15 November, the conversion was completed on 21 December. The ship proceeded to Norfolk, Virginia, and joined Mine Squadron 20. On 3 January 1945, Butler left for Sand Diego, California, and then continued her journey to Pearl Harbor, Hawaii.
After completing extensive training exercises off the coast of Hawaii, Butler sailed to the US Navy base at Ulithi atoll in the Caroline Islands and then conducted a pre-invasion mine sweeping operation around the Japanese island of Okinawa. From 24 March to 25 May 1945, Butler was assigned to escort and radar “picket” duty during the invasion of Okinawa and did manage to shoot down several Japanese aircraft. But on 25 May, a Japanese kamikaze suicide plane dropped some bombs which exploded underneath Butler’s keel, killing nine men and blowing out steam lines and flooding the forward fire room, causing the loss of all steam and electric power. The battleship USS West Virginia (BB-48) stood by Butler until power was regained. The battleship also assisted Butler in fighting off two more Japanese aircraft that were trying to sink the crippled destroyer. The next day, Butler steamed to Kerama Retto Island for temporary repairs before returning to the United States. After reaching the United States on 26 August, the ship’s damage was judged to be so severe that it did not justify permanent repairs and retention in the post-war fleet. USS Butler, therefore, was decommissioned on 8 November 1945 and sold for scrapping on 10 January 1948. The ship received the Navy Unit Commendation for her actions during the Okinawa operation and four battle stars for her service during World War II.
Posted by Remo at 9:11 AM