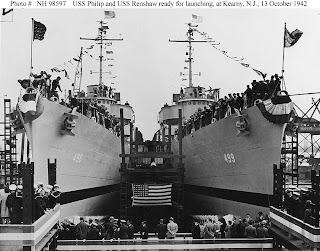 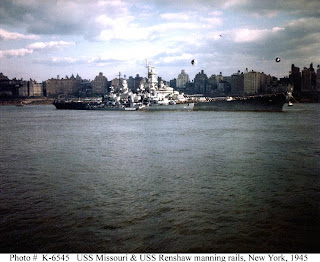 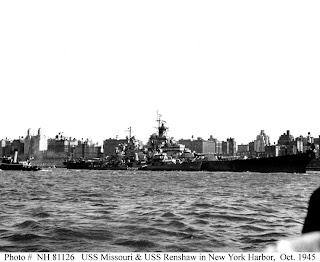 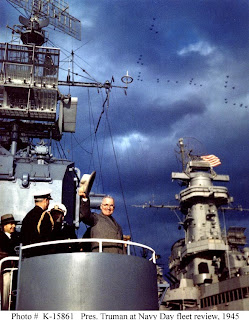 Figure 4:   President Harry S. Truman (waving his hat) with his party on board USS Renshaw (DD-499) during the Navy Day Fleet Review in New York Harbor, New York, 27 October 1945. USS Missouri is in the right background and Navy planes are flying in formation overhead. Official US Navy Photograph, now in the collections of the U.S. National Archives. Click on photograph for larger image. 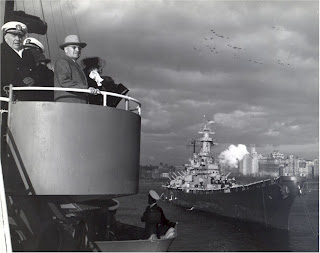 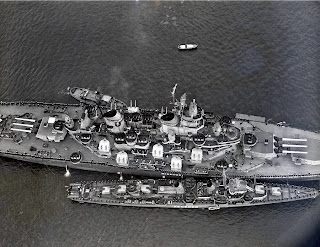 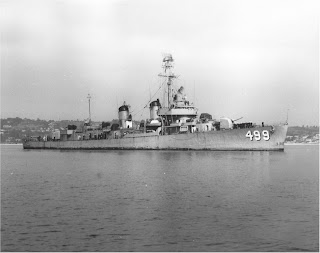 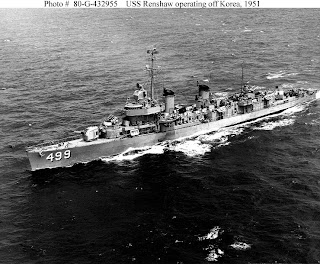 Figure 8:  USS Renshaw (DDE-499) photographed from an aircraft from USS Sicily (CVE-118) while operating in Korean waters. Photograph is dated 27 July 1951. Official US Navy photograph, now in the collections of the National Archives. Click on photograph for larger image. 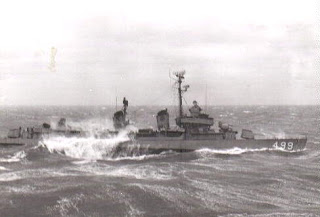 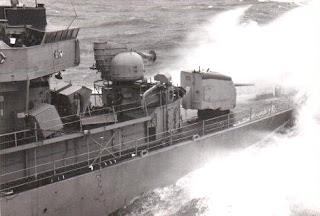 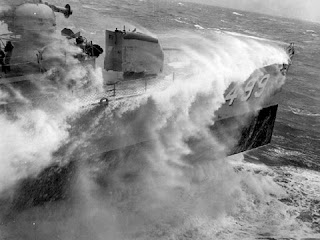 Figure 11:  USS Renshaw (DD-499) in the North China Sea during the summer of 1965. Photograph courtesy of Joe Radigan. Click on photograph for larger image. 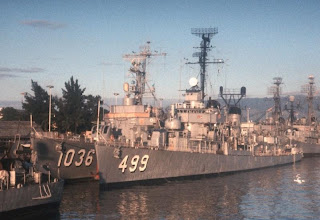 
Named after US Navy Commander William B. Renshaw (1816-1863), who was killed while heroically defending his ship during the Civil War, the 2,940-ton USS Renshaw was a Fletcher class destroyer that was built by the Federal Shipbuilding and Dry Dock Company at Kearny, New Jersey, and was commissioned on 5 December 1942. The ship was approximately 376 feet long and 39 feet wide, had a top speed of 38 knots, and had a crew of 273 officers and men. Renshaw was armed with five 5-inch guns, four 40-mm guns, six 20-mm guns, ten 21-inch torpedo tubes, two depth-charge tracks, and six depth-charge projectors.

Renshaw was assigned to the US Navy’s Pacific Fleet in the spring of 1943 and escorted merchant ships and transports to the Solomon Islands. On 2 July 1943, Renshaw bombarded Vila Stanmore and Shortland Island in the Solomons while coming under fire from Japanese shore batteries. From 21 November 1943 to 20 January 1944, Renshaw’s guns continued to pound targets in the Solomon Islands. In March of 1944, Renshaw bombarded Japanese positions in New Guinea, especially during the Allied landings on New Britain and New Ireland.

After going to Pearl Harbor, Hawaii, to attend some amphibious naval exercises, Renshaw escorted a group of Landing Ship Tanks (LSTs) to the Marianas Islands. The destroyer steamed next to the beach at Tinian in the Marianas Islands and provided close fire support for the American troops on shore. Renshaw then participated in the invasion of the Philippines and in November 1944, while conducting an anti-shipping patrol off the island of Leyte, the destroyer spotted a surfaced Japanese submarine. Renshaw, along with several other American destroyers, opened fire on the submarine and after a few minutes the enemy warship was blown to pieces and sank. After that, Renshaw sailed into Ormoc Bay off Leyte and intercepted a large Japanese barge, which she subsequently fired on and sank.

On 31 December 1944, Renshaw was part of a task force that escorted a large convoy of transports and merchant ships into Lingayen Gulf off the island of Luzon in the Philippines. The actual amphibious invasion of Luzon began on 9 January 1945, with American troops landing between the towns of Lingayen and San Fabian.  Despite repeated Japanese air attacks, Renshaw and the other escorts enabled the convoy to complete the landings without any serious losses.

On 21 February 1945, while steaming in the Mindanao Sea off the Philippines, Renshaw was hit by a torpedo from a Japanese submarine. The torpedo exploded roughly ten feet below the waterline, flooding part of the ship. All power was lost and a large section of the hull was warped by the explosion, with bulkheads and decks being fractured as well. But even though 19 men were killed and 20 injured, within a few minutes damage control parties had the flooding reduced by half. Because of the crew’s valiant efforts, the main propulsion machinery suffered no damage. Renshaw remained afloat, but just barely. She completed temporary repairs by April 1945 with the assistance of the destroyer tender USS Whitney (AD-4) and the repair ship Prometheus (AR-3). The ship then limped under her own power to Tacoma, Washington, where permanent repairs were made at the Todd Pacific Shipyards. All work was finally completed by early October 1945.

Renshaw participated in the major Navy Day celebration on 27 October 1945. The event took place in New York Harbor, New York, and President Harry S. Truman reviewed the fleet that was assembled there from USS Renshaw. It was a proud day for the veteran destroyer and it was an enormous display of naval power that celebrated the successful end of World War II. But in February 1947, Renshaw was decommissioned and placed in the US Navy’s Atlantic Reserve Fleet. From 1949 to 1950, the ship was converted into a specialized anti-submarine vessel and then re-commissioned in June 1950 as DDE-499.

During the Korean War, Renshaw completed two tours of duty in the Far East, from May to November 1951 and November 1952 to June 1953. While steaming off the coast of Korea, Renshaw was used as an escort and as a patrol, search and rescue, and fire support vessel. After the war, Renshaw served in the Pacific Proving Grounds from February to May 1954 and was part of “Operation Castle,” which were six large nuclear tests conducted at the Bikini and Enewetak Atolls. The most notable test was “Castle Bravo,” which was of the first deployable hydrogen bomb built by the United States. Its yield (15 megatons) was more than twice as powerful as predicted and was the largest weapon ever detonated by the United States. Renshaw was part of Joint Task Force 7 throughout these tests and was assigned to patrol and air control duties.

From June to August 1954, Renshaw was in the Far East and participated in anti-submarine naval exercises with a force composed of American and Canadian warships. On 8 August 1955, Renshaw sailed for her fourth tour of duty in the Far East, with most of her time dedicated to anti-submarine exercises and task force operations. She subsequently made several additional Far Eastern deployments from October 1956 to October 1960 while based at Pearl Harbor.

From 1960 to 1963, Renshaw patrolled various parts of the Pacific, mainly working out of Pearl Harbor. On 7 August 1962, the ship was re-designated a destroyer and was given back her old hull number of DD-499. On 3 October 1962, Renshaw participated in the recovery of Project Mercury astronaut Commander Walter M. Schirra.

On 3 March 1965, Renshaw, along with other ships from Destroyer Division 252, left Pearl Harbor on short notice to assist other destroyers in the South China Sea off the coast of Vietnam. From April to May, the ship served in surveillance roles and supported carrier strike operations. In June, the destroyer patrolled the waters off Taiwan, but Renshaw returned to Vietnam in July and remained there until September before steaming back to Pearl Harbor.

Renshaw began her eleventh tour of duty in the Far East on 5 July 1966. She participated in anti-submarine operations, served as an aircraft carrier rescue destroyer, and went on special operations with USS Chicago (CG-11) in the Gulf of Tonkin off the coast of Vietnam. The ship also completed various patrol assignments in the Taiwan Strait.

Renshaw remained in Hawaiian waters throughout 1967. She left Pearl Harbor on 8 April 1968 for yet another tour of duty in the Far East. During this deployment, Renshaw primarily escorted the fast carrier attack forces on Yankee Station in the Gulf of Tonkin. In September, Renshaw returned to Pearl Harbor. In June 1969, Renshaw was sent back to Yankee Station and completed numerous search and rescue and patrol missions. In December, the ship sailed to Pearl Harbor and on 14 February 1970, Renshaw was decommissioned and struck from the Navy list that same day. The old destroyer was sold for scrapping in October 1970.  USS Renshaw received eight battle stars for her service in World War II, five battle stars for her service during the Korean War, and six battle stars for her service during the Vietnam War.
Posted by Remo at 9:42 AM