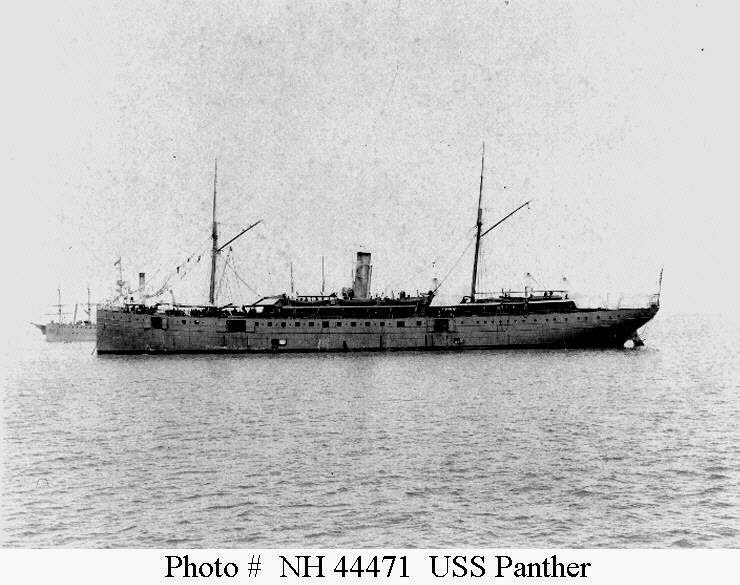 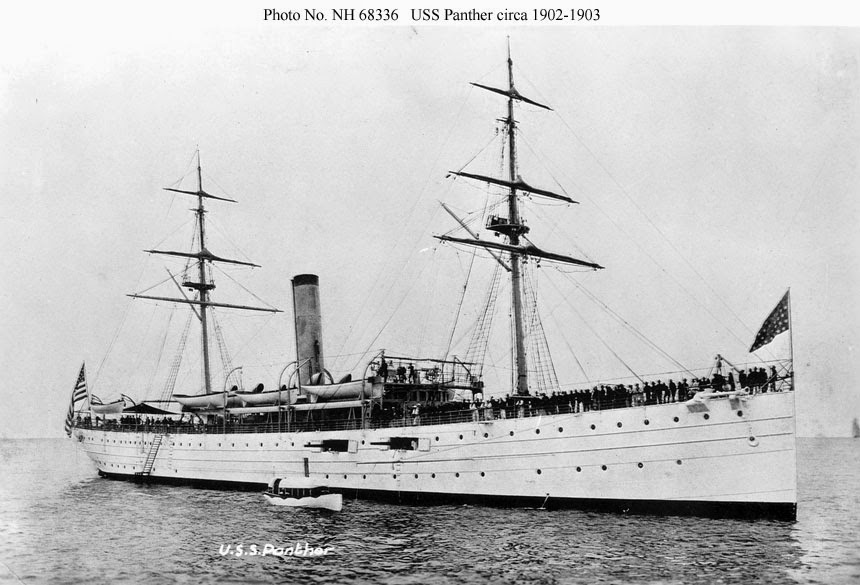 Figure 2:  Training Ship USS Panther at anchor, probably during her period in commission from June 1902 to October 1903 after being refitted as a training ship with topmasts and heavy yardarms. Her main battery has been rearranged, guns now being visible in the two open hull ports and on deck forward of the foremast. Courtesy US Naval History and Heritage Command. Click on photograph for larger image. 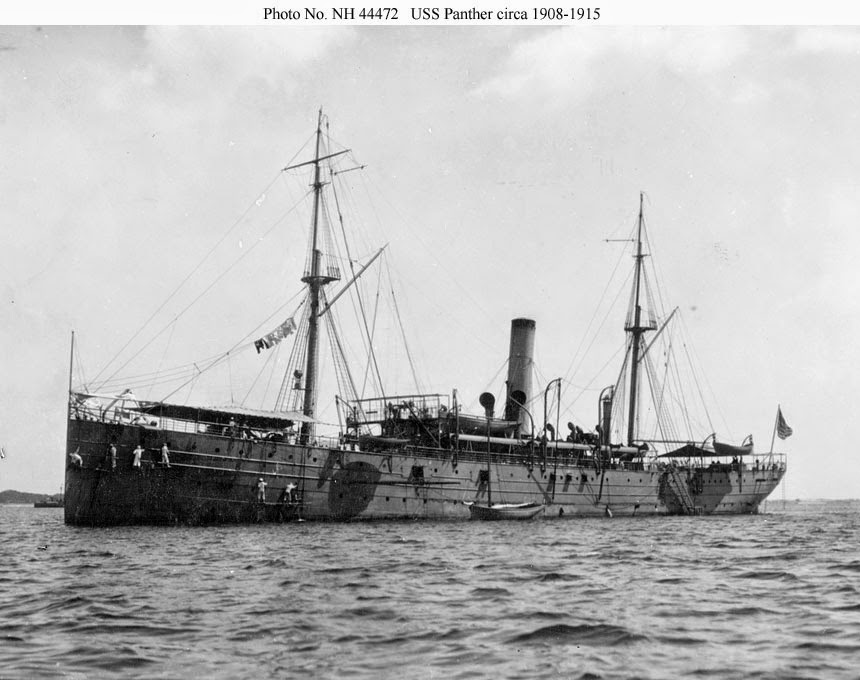 Figure 3:  USS Panther while serving as a repair ship for the Atlantic Fleet sometime after the fleet converted from white to gray paint in 1909 and before she was fitted with 3-inch guns around 1915. The spreaders suspended from the tops of the masts supported long-wire radio antennas. Courtesy US Naval History and Heritage Command. Click on photograph for larger image.

Figure 4:  USS Panther moored in Kirkwall Harbor, Orkney Islands, while supporting the North Sea mine barrage clearance operation in 1919. She has several trawlers and submarine chasers alongside. Halftone reproduction of a photograph published in the cruise book, Sweeping the North Sea Mine Barrage, 1919, page 33. Courtesy US Naval History and Heritage Command. Click on photograph for larger image. 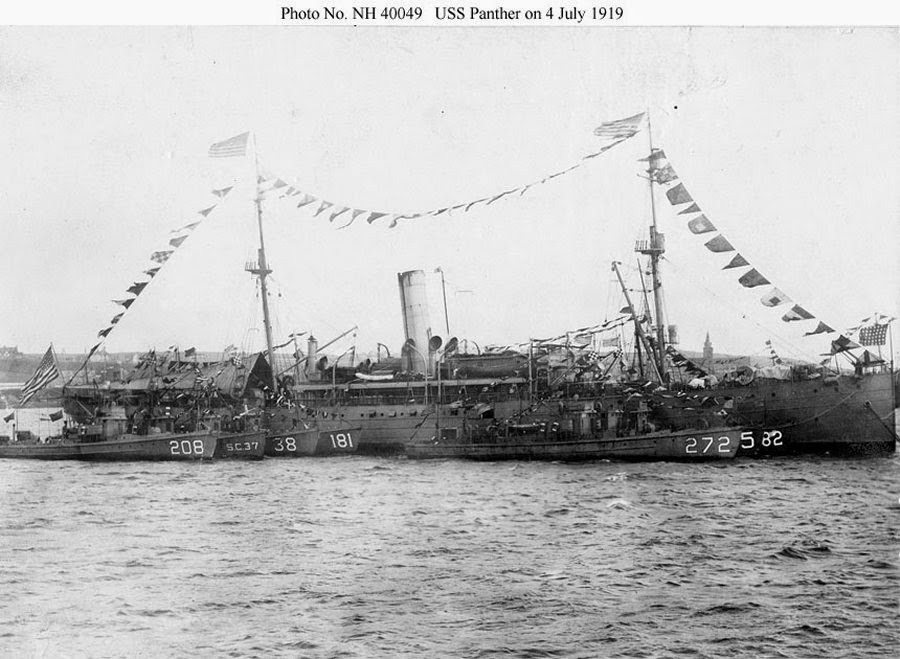 Figure 5:   USS Panther fully “dressed” with flags, 4 July 1919, at Kirkwall, Scotland, tending sub chasers and trawlers helping to sweep the North Sea Mine Barrage. She took over this duty from USS Black Hawk, which continued to support the force's minesweepers. Panther’s four 3-inch guns are located on the deck forward of the foremast and near the stern.  Courtesy US Naval History and Heritage Command. Click on photograph for larger image.


Panther was an iron-hulled steamer that was built by William Cramp and Sons at Philadelphia, Pennsylvania, in 1889 and was purchased by the US Navy from the Red D. Line Steamship Company on 12 April 1898 for use as an auxiliary cruiser during the Spanish-American War. Commissioned on 22 April 1898, the now USS Panther was approximately 324 feet long and 40 feet wide, had a top speed of 13 knots, and had a crew of 138 officers and men. As an auxiliary cruiser, the ship was armed with six 5-inch guns, two 4-inch guns, six 3-pounders, and one Colt machine gun. Although auxiliary cruisers were technically supposed to be used as offensive warships, they were generally assigned to transport, escort, and patrol duties.

During the Spanish-American War, Panther patrolled off the coast of Cuba and was used as a transport for both Marines and their military cargo. After the war ended, the ship was decommissioned in 1899. She was re-commissioned in 1902 and converted into a training ship for naval militia and was also used as a transport for Marines going to Central America. After serving as a station ship in Honduras and transporting Marines to both the Caribbean and Central America, Panther was again decommissioned on 21 October 1903.

Panther was re-commissioned on 18 November 1907 to serve as an auxiliary repair ship for the Navy’s North Atlantic Fleet. After America entered World War I in 1917, Panther steamed to Brest, France, on 1 July to serve as a tender for the US destroyer force in European waters. After the war ended in November 1918, Panther continued repairing troop ships and sub chasers in such diverse ports as Bassens, France; Kirkwall, Scotland; and Davenport, England. Panther left England on 10 October 1919 and escorted a squadron of sub chasers across the Atlantic, stopping at Brest; Lisbon, Portugal; Ponta Delgada, Azores; Bermuda; and finally arriving in New York City, New York, on 19 November.

Panther went to Philadelphia for repairs on 29 November 1919 and remained there until 6 February 1920. She then sailed to the Azores to serve there as a station repair ship. Later that year, Panther served as the flagship for Destroyer Division 13 and steamed to the Far East for duty with the Asiatic Fleet. Stationed at the Cavite Navy Yard in the Philippines, she tended to six destroyers as they conducted patrols in Chinese and Philippine waters.

Panther remained in the Philippines for only a short time before returning to the United States and being decommissioned for the last time at New York City on 10 May 1922. Struck from the Navy list on 5 August, the old steamer was sold for scrapping on 24 March 1923.