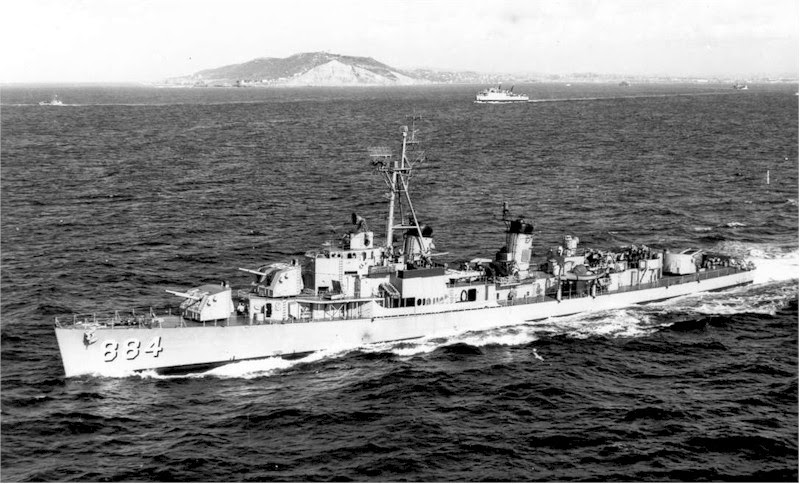 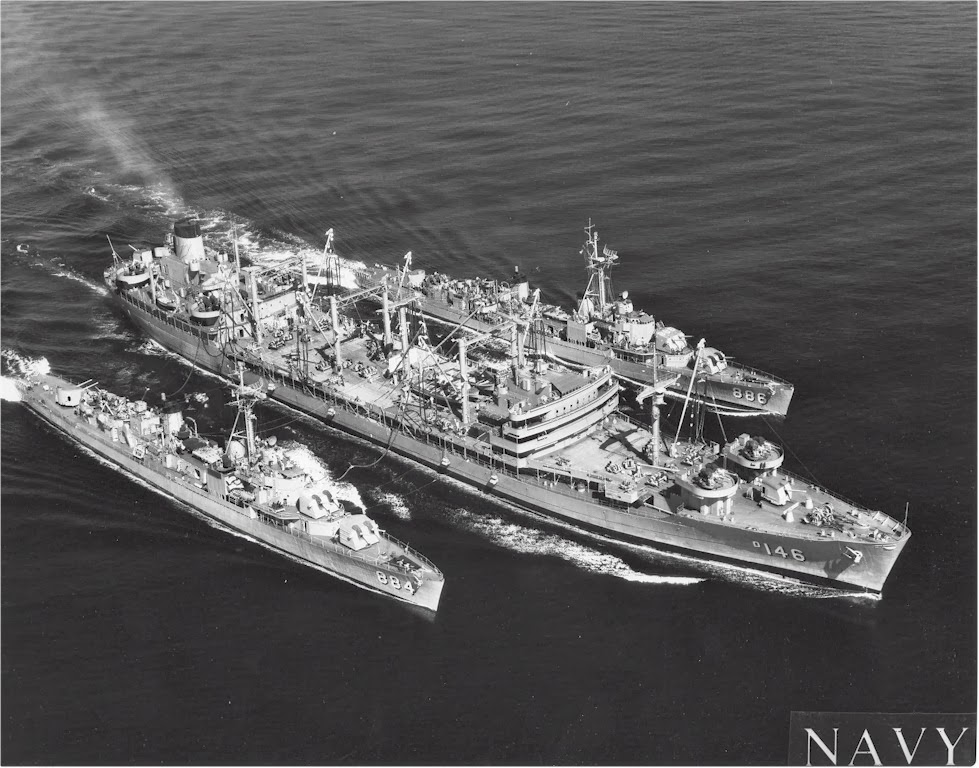 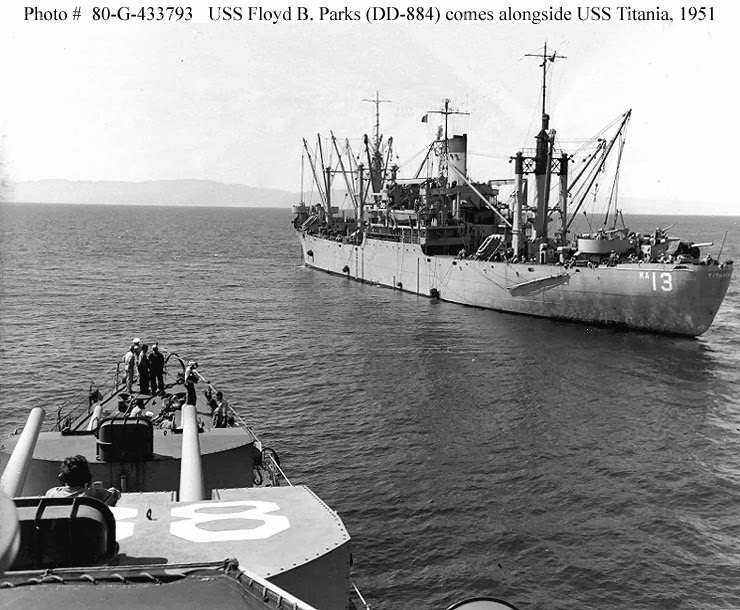 Figure 3: USS Titania (AKA-13) in Wonsan Harbor, North Korea, circa 10-13 September 1951, as seen from USS Floyd B. Parks (DD-884), which is coming alongside to take on fuel. Photographed by AFAN E.A. McDade. Official US Navy Photograph, now in the collections of the U.S. National Archives. Click on photograph for larger image. 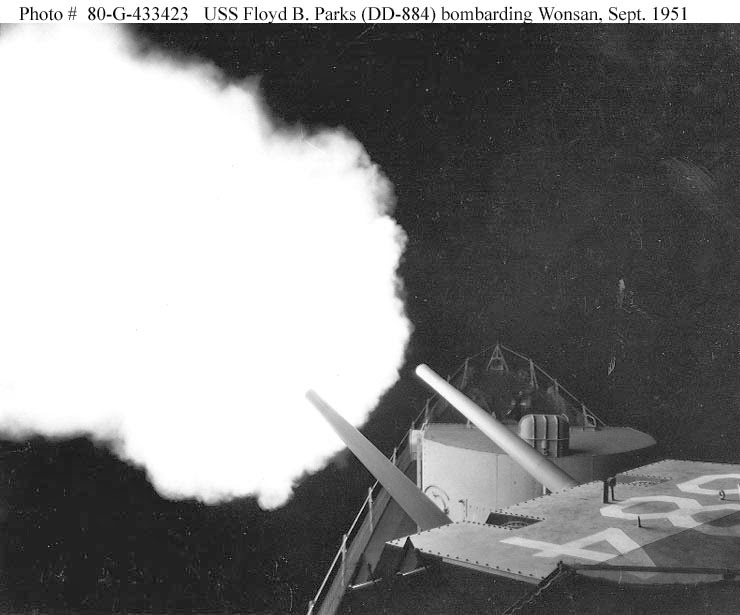 Figure 4: USS Floyd B. Parks (DD-884) fires a 5-inch gun of mount 52, while bombarding Wonsan, North Korea, during the siege of Wonsan, 25 September 1951. Official US Navy Photograph, now in the collections of the U.S. National Archives. Click on photograph for larger image. 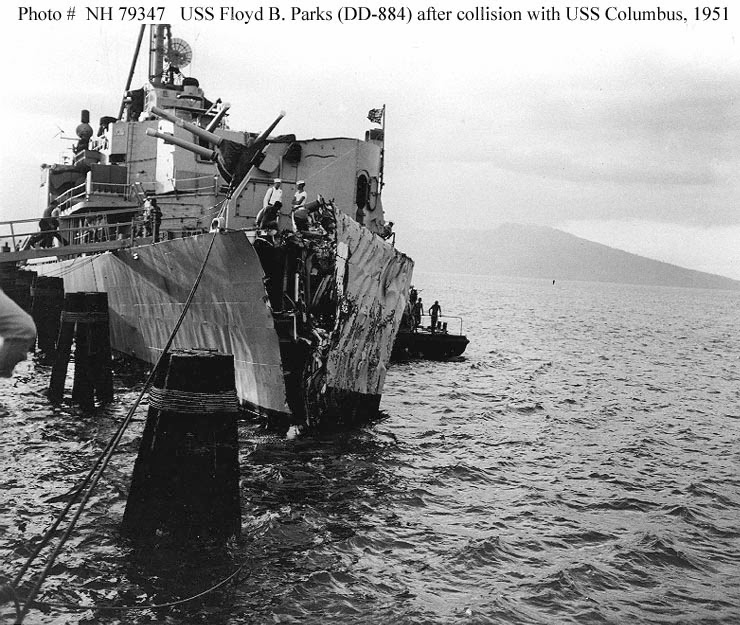 Figure 5: USS Floyd B. Parks (DD-884) at Subic Bay, the Philippines, showing damage to her bow received in a collision with USS Columbus (CA-74) on 11 March 1956. NOTE: the picture is mislabeled and the collision did occur in 1956. US Naval Historical Center Photograph. Click on photograph for larger image. 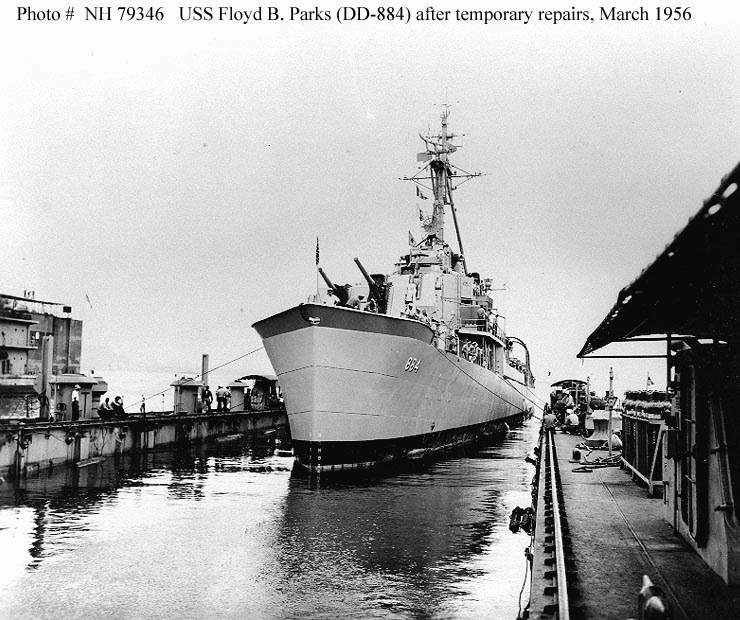 Figure 6:  USS Floyd B. Parks (DD-884) undocking from ARD-22 at Subic Bay, the Philippines, circa late March or early April 1956, after being fitted with a temporary bow to allow her to steam to the United States for permanent repairs. She had been damaged in a collision with USS Columbus (CA-74) on 11 March 1956. US Naval Historical Center Photograph. Click on photograph for larger image. 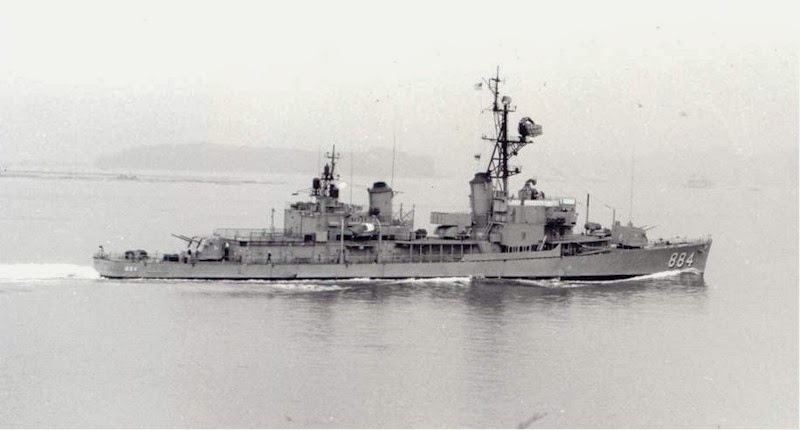 Figure 7:  USS Floyd B. Parks (DD-884) off the coast of Japan in February 1964, after her “FRAM-1” modernization.  Photograph courtesy of Marc Piché. Click on photograph for larger image. 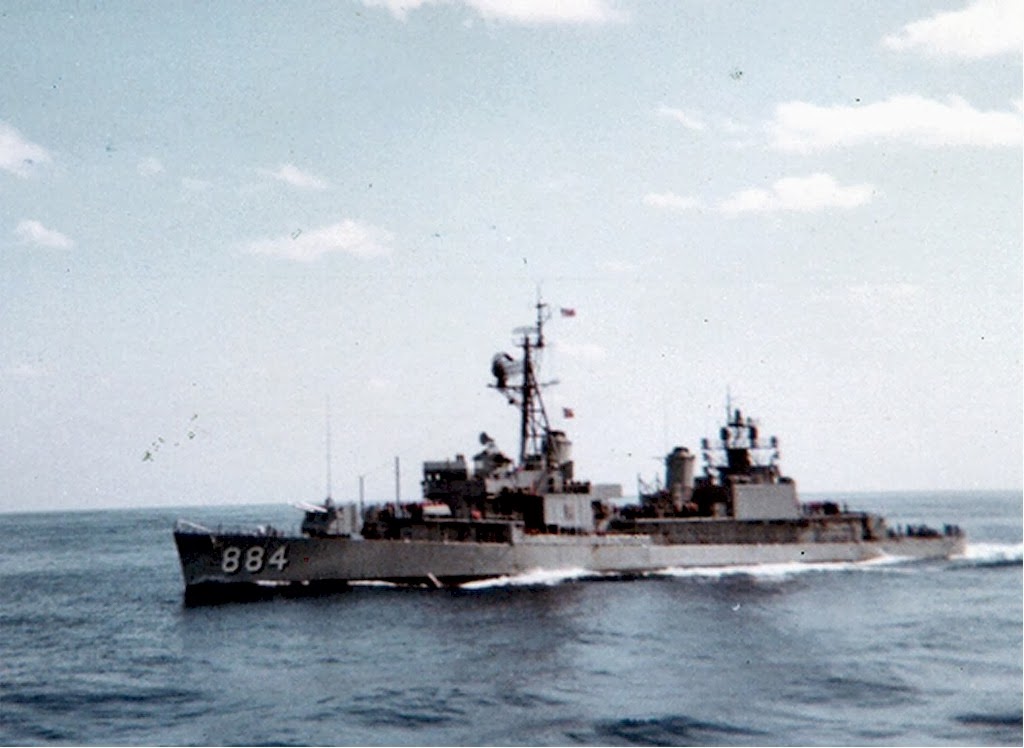 Figure 8:  USS Floyd B. Parks (DD-884) as seen from the aircraft carrier USS Hancock (CVA-19) off the coast of Vietnam, March 1967. Photograph courtesy of Charles Dehnert. Click on photograph for larger image. 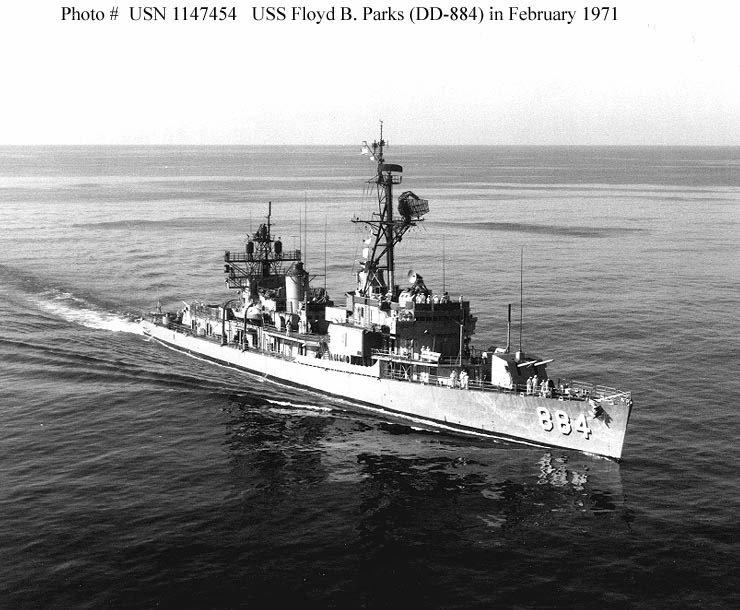 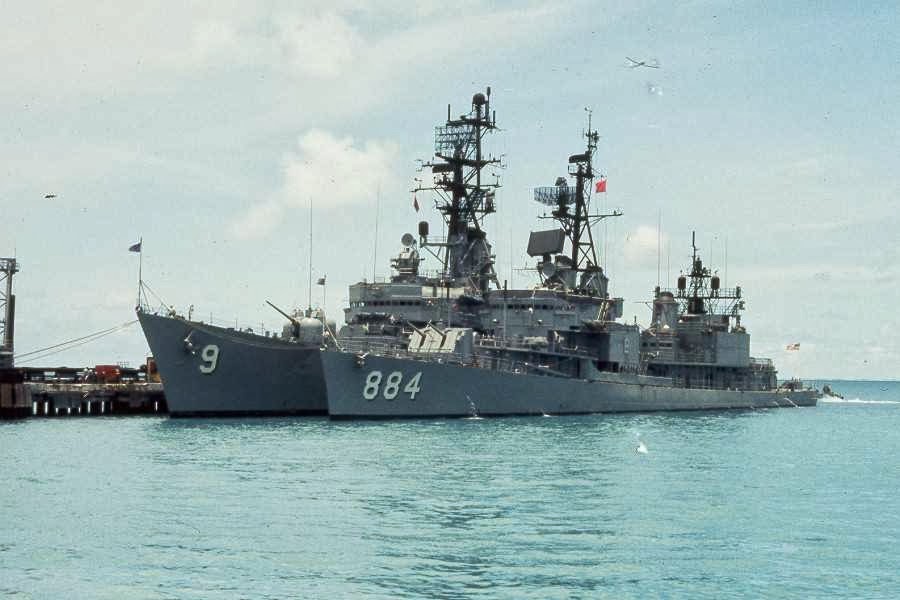 
Named after Major Floyd B. Parks, USMC, a pilot who was killed in action during the Battle of Midway, the 2,425-ton USS Floyd B. Parks (DD-884) was a Gearing class destroyer that was built by the Consolidated Steel Corporation at Orange, Texas, and was commissioned on 31 July 1945. The ship was approximately 390 feet long and 41 feet wide, had a top speed of 35 knots, and had a crew of 336 officers and men. Floyd B. Parks was originally armed with six 5-inch guns, 12 40-mm guns, 11 20-mm guns, 10 21-inch torpedo tubes, and depth charges, but this armament changed dramatically in later years.

After completing her shakedown cruise, Floyd B. Parks left San Diego, California, on 20 November 1945 for her first tour of duty in the Far East, patrolling off the coasts of China and the Mariana Islands until she returned to San Diego on 11 February 1947. This was the first of 20 western Pacific deployments she completed over the next 27 years.

After the Korean War began in June of 1950, Floyd B. Parks sailed from San Diego on 19 February 1951 to join United Nations naval forces off the coast of Korea. On 16 March, the destroyer began escorting a fast carrier task force and she also spent a total of 60 days in Wonsan Harbor, Korea, on blockade and bombardment duty. While providing gunfire support for UN troops on shore, Floyd B. Parks fired more than 12,000 5-inch shells at communist forces. The ship returned to San Diego on 10 October 1951 and, after an overhaul, went back to the Far East on 31 May 1952. Along with duty similar to that of her first wartime deployment, Floyd B. Parks also patrolled in the South China Sea and the Taiwan Strait. The ship returned to San Diego on 18 December 1952. She then began a peace-time routine of annual cruises to the Far East, interspersed with training exercises off America’s west coast and necessary maintenance overhauls.

During her deployment to the Far East in 1955, Floyd B. Parks participated in the evacuation of the Tachen Islands off the coast of China. The Tachen Islands were about to be invaded by communist Chinese forces from the mainland, so the US Seventh Fleet used 132 ships and 400 aircraft to evacuate 14,500 civilians, 14,000 Republic of China (or non-communist) troops, and roughly 40,000 tons of military equipment and other supplies from the islands. Three days after the evacuation was completed, communist Chinese forces invaded and took over the islands. All of the civilians and troops were brought safely to Taiwan, which became the Republic of China.

On 11 March 1956, while on another Far Eastern deployment, Floyd B. Parks accidentally collided with the cruiser USS Columbus (CA-74), losing two crewmen and a 40-foot section of her bow. Skillful damage control by her crew saved the ship, and Floyd B. Parks managed to make it to Subic Bay in the Philippines for temporary repairs. After those repairs were completed, Floyd B. Parks steamed to Long Beach, California, for permanent repairs, arriving there on 14 May 1956. Floyd B. Parks’ damaged bow was replaced with one from an uncompleted destroyer and, after the new bow was welded on and new equipment was installed, the ship returned to the Far East that summer.

Towards the end of the 1950s, Floyd B. Parks supported nuclear tests in the central Pacific. From 1962 to 1963, the destroyer was given an extensive “FRAM-1” modernization to better equip her for more modern anti-submarine warfare. But as American participation in the Vietnam conflict expanded during the mid-1960s, Floyd B. Parks was regularly stationed off Vietnam and in the South China Sea. Her principal mission, though, was not anti-submarine warfare, but shore bombardment in support of American troops on land. In this role, she fired thousands of 5-inch shells at communist forces along the Vietnamese coast. Floyd B. Parks was deployed to Vietnam in 1968, 1969, 1971, and 1972.

With newer, larger, and much more capable destroyers rapidly entering the fleet, USS Floyd B. Parks was decommissioned in July 1973, shortly after her final deployment to Vietnam. After nearly 30 years of service, she was sold for scrapping in April 1974.
Posted by Remo at 8:51 AM