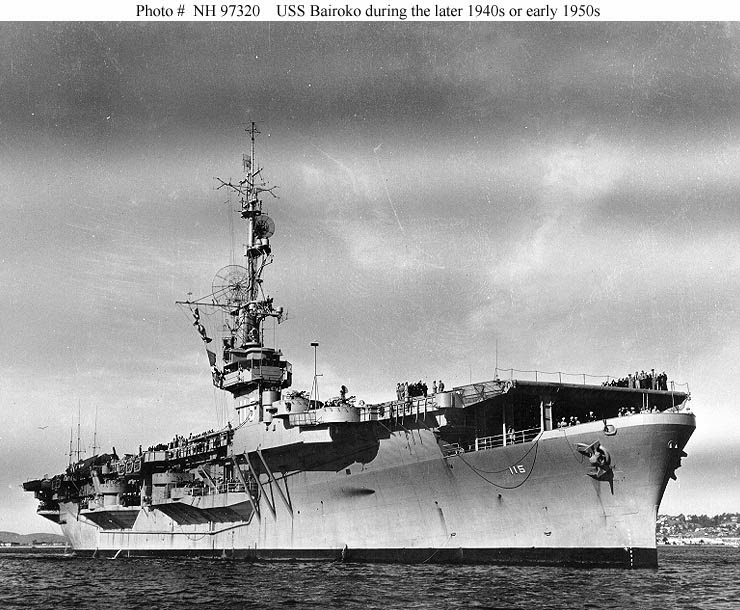 Figure 1:  USS Bairoko (CVE-115) photographed during the later 1940s or early 1950s, off San Diego, California. This photograph was received by the Naval Photographic Center in December 1959, many years after it was taken. Official US Navy Photograph, from the collections of the Naval Historical Center. Click on photograph for larger image. 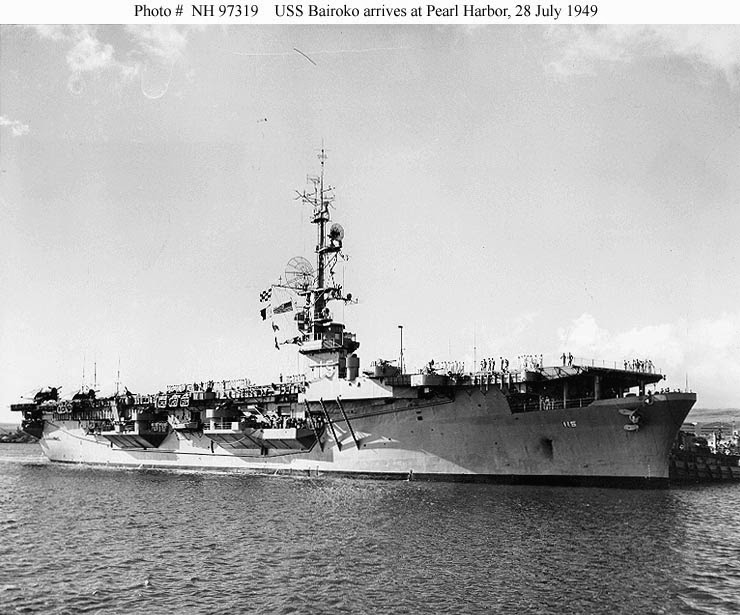 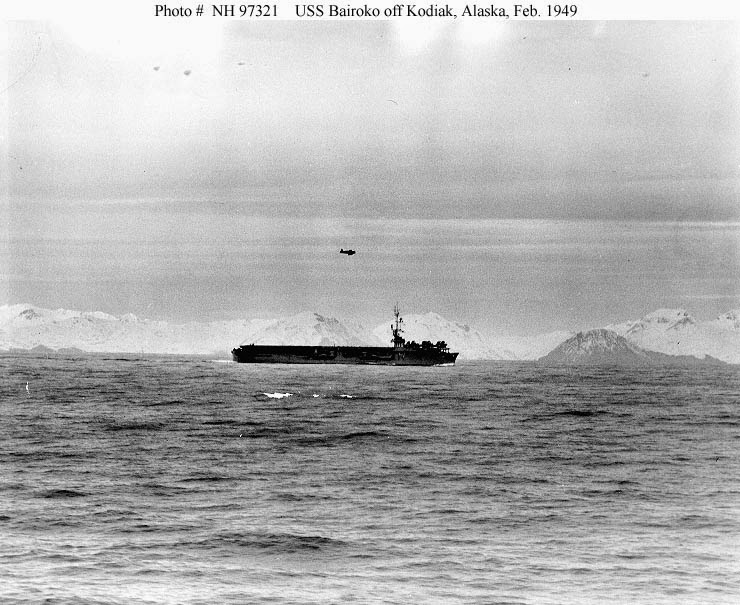 Figure 3: "Escort carrier the USS Bairoko (CVE-115), part of the Air Support Group under the command of Rear Admiral M.R. Greer, USN, steams past snow covered mountains of Kodiak, Alaska, while recovering Marine support aircraft during a training exercise.” Quoted from the original picture caption. This view was taken by a USS Boxer (CV-21) photographer on 10 February 1949. A US Marine Corps F4U Corsair aircraft is flying over the carrier and other F4Us are parked on her flight deck, forward. Kodiak Island is in the background. Official US Navy Photograph, from the collections of the Naval Historical Center. Click on photograph for larger image. 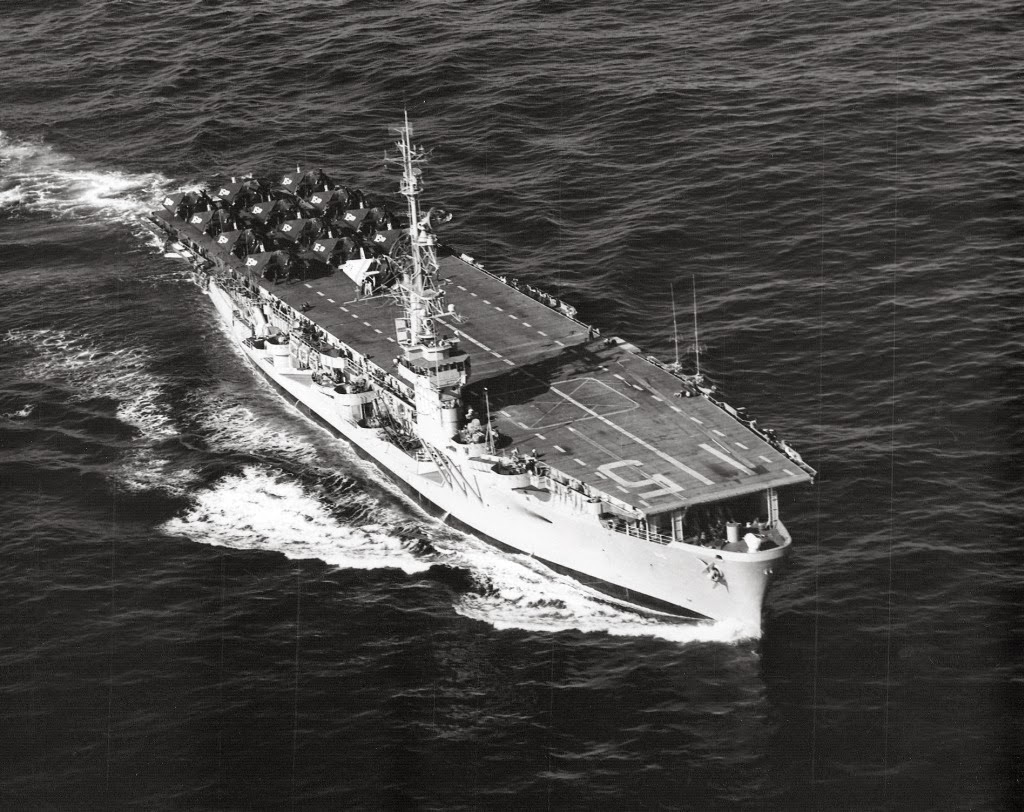 Figure 4: Aerial view of USS Bairoko (CVE-115) underway. This photograph is dated 20 April 1950, but was probably taken during the second half of 1949, as Bairoko reported to San Francisco Naval Shipyard at San Francisco, California, for pre-inactivation maintenance on 15 December 1949 and was placed out of commission and in reserve on 14 April 1950. US Navy and Marine Corps/Naval Aviation Museum photograph, from the Robert L. Lawson Photograph Collection. Click on photograph for larger image.

Named after a small harbor on the northern coast of New Georgia in the Solomon Islands, the 24,275-ton USS Bairoko (CVE-115) was a Commencement Bay class escort aircraft carrier that was built by the Todd-Pacific Shipyard at Tacoma, Washington, and was commissioned on 16 July 1945. The ship was approximately 557 feet long and 75 feet wide, had a top speed of 19 knots, and had a crew of 1,066 officers and men. Bairoko was armed with two 5-inch guns, 36 40-mm guns, and 20 20-mm guns, and could carry 33 aircraft.

After being commissioned, Bairoko served in the Pacific throughout her career. She was deployed to the Far East after the end of the war in October 1945 and remained there until January 1946. The ship returned to the United States in January 1946 and in February steamed to Tacoma, Washington, for three weeks of modifications designed to allow her to operate jet aircraft. After spending over a year ferrying aircraft to Pearl Harbor, Hawaii, and to Tsingtao, China, Bairoko returned to the west coast of the United States.

On 7 January 1948, Bairoko went to Terminal Island at San Pedro, California, to prepare for an unusual assignment.  She was given the task of supporting Operation Sandstone, which was a three-detonation series of atmospheric nuclear tests that were held at Eniwetok Atoll in the Marshall Islands. Bairoko was equipped with an instrument repair laboratory and a decontamination center on her hanger deck. The ship left San Pedro on 15 February and was loaded with reconnaissance aircraft, helicopters, and a radiological safety group of scientists.

Bairoko arrived at Eniwetok Atoll on 17 March 1948 and joined 27 other Navy ships supporting the nuclear weapon tests. Bairoko carried six helicopters for scientific use and served as the radiological operations center during the three small tests held on 15 April, 1 May, and 15 May. As the escort carrier remained in the lagoon during each nuclear explosion, observers on deck were only 8.5 miles away from the 15 May eight-kiloton blast, close enough to look up through the bottom of the mushroom cloud. Following each detonation, helicopter and LCVP small boat crews from Bairoko took radiation readings in the lagoon and collected film and soil samples from the blast area. After her crew helped decontaminate aircraft and equipment, Bairoko returned to the United States in early June and arrived at San Diego, California, later that month.

Bairoko spent the next five months conducting pilot qualification operations, antisubmarine warfare exercises, and other battle drills off the coast of southern California. On 15 December 1948, owing to rapidly dwindling defense spending, Bairoko was sent to the San Francisco Naval Shipyard in San Francisco, California, for pre-inactivation maintenance. After the preservation measures were completed, Bairoko was placed out of commission and in reserve on 14 April 1950.

Bairoko’s inactivation a short one because North Korean communist troops invaded South Korea on 25 June 1950. Two days later, under United Nations (UN) auspices, the United States entered the conflict. Because of the urgent need for warships and aircraft carriers in particular, Bairoko was re-commissioned on 12 September 1950.

After fitting out with aircraft, supplies, ammunition, and a full crew, Bairoko left Alameda, California, on 14 November and arrived at Yokosuka, Japan, on 29 November. For the next five months, Bairoko and her aircraft participated in numerous antisubmarine exercises which were designed to locate and track Soviet submarines, just in case the Soviet Union entered the Korean War.

These operations, though, came to an abrupt halt on 10 May 1951, when Bairoko suffered an explosion and flash fire while in port at Yokosuka. The fire broke out in the flight hanger and spread into the engine room. Five men died before the flames were extinguished. The fire also damaged bulkheads and burned out numerous ventilation and electrical systems. Repairs were started immediately and, after they were completed in late June, the escort carrier resumed training operations off the coast of Japan on 3 July.

With her tour of duty completed on 30 July 1951, Bairoko sailed to the United States on 4 August and arrived at San Diego 11 days later. The escort carrier remained in port until 10 September and began ten weeks of routine flight operations while based at San Diego. On 1 December, Bairoko once again left for the Far East and arrived at Yokosuka on 16 December.

Bairoko left Yokosuka on 28 December and was heading for Okinawa when, as she was leaving port, the ship struck a mooring buoy. Two propeller blades were bent in the accident and the damage forced Bairoko into dry dock for repairs. After being repaired, the escort carrier left for combat operations off the coast of Korea, arriving there on 16 February 1952.

For the next nine days, Bairoko launched fighters for patrol sweeps and targets-of-opportunity air strikes against communist positions between the Yesong and Taedong Rivers in Korea. Although modified to accommodate jet aircraft, Bairoko carried only piston-engine propeller-driven planes. During the 121 combat sorties flown in this period, Bairoko’s aircraft bombed and strafed communist-held bridges, enemy gun positions, and supply vehicles. Bairoko returned to Japan and arrived at the port of Sasebo on 25 February for fuel, ammunition, and provisions.

In March 1952, Bairoko conducted two more combat missions in the Yellow Sea, one between 5 and 13 March, and the other between 23 March and 1 April. Although 139 combat sorties were flown against communist targets, five planes were shot down during these attacks on heavily defended enemy positions, such as the Chinnampo rail yards and the Amgak Peninsula. One pilot was killed, two were taken off of ice floes in the sea and rescued by helicopters, a fourth was found by boat crews from the British frigate HMS Cardigan Bay (F.630), and the last pilot dramatically jumped on board an American rescue helicopter just in time to avoid capture by North Korean troops. Two other pilots were wounded by shrapnel during this period, but both were able to make emergency landings on board the ship without incident.

After loading fuel and supplies at Sasebo during the first week of April 1952, Bairoko resumed combat operations along the west coast of Korea on 9 April. Over the next eight days, the ship’s aircraft flew 165 combat missions against communist targets in western Korea. These were primarily air strikes against buildings, North Korean garrisons, and the occasional train. Although 20 planes were damaged by small arms and antiaircraft fire, only two planes were lost in these operations. The first crashed on 11 April during a landing attempt on the carrier, leaving the pilot uninjured, and the second plane was severely damaged during a strafing run on a North Korean target on 14 April. The pilot managed to glide his stricken World War II-vintage F4U Corsair attack fighter over a beach and ditch the plane offshore. He was rescued 15 minutes later by a flying boat.

Bairoko was relieved by the British light carrier HMS Glory on 18 April 1952 and returned to Japan for some minor repairs. After participating in antisubmarine warfare training exercises, Bairoko left for the United States on 26 May. She arrived at San Diego on 10 June and, two weeks later, entered the Long Beach Naval Shipyard at Long Beach, California, for repairs to machinery and equipment worn out during her long deployment in the Far East.

After completing her overhaul and participating in several training exercises, Bairoko returned to the west coast of Korea and resumed combat operations on 14 May 1953. The escort carrier’s aircraft were assigned to enforce a blockade along the west coast of North Korea. Despite bad weather, Bairoko’s F4U Corsairs flew 183 combat air patrol, photo reconnaissance, and strike missions against communist positions. Her Corsairs also few close air support during an Army raid south of the Taedong estuary. After returning briefly to Sasebo on 22 May, Bairoko carried out four more patrols in the Yellow Sea between 30 May and 27 July 1953. Throughout this period, Bairoko’s aircraft cooperated with friendly Korean partisan infantry regiments in harassing communist troop movements and bridge reconstruction efforts. Between 17 and 26 June, Bairoko’s planes also covered the evacuation of partisan regiments and their families from the islands they had held off the coast of North Korea. Bairoko’s final combat tour of duty, marked by numerous air strikes against enemy logistic movements in northwest Korea, ended on the evening of 27 July 1953, the night the Korean armistice took effect.

Bairoko returned to San Diego on 24 August 1953. After completing an overhaul at the Long Beach Naval Shipyard, Bairoko participated in yet another nuclear bomb test at Bikini Atoll in the Marshall Islands. After the tests were completed, Bairoko sailed back to the United States and was eventually sent to the San Francisco Naval Shipyard for inactivation. Bairoko was decommissioned on 18 February 1955 and assigned to the Pacific Reserve Fleet at San Francisco. Although re-classified an aircraft ferry and re-designated AKV-15 on 7 April 1959, the ship was never re-commissioned. USS Bairoko was sold for scrapping on 10 August 1960.
Posted by Remo at 8:31 AM