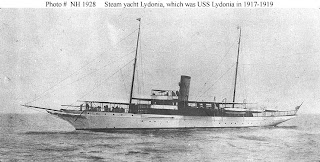 Figure 1:  Lydonia (American Steam Yacht, 1912). Halftone reproduction of a photograph taken prior to World War I. This yacht served as USS Lydonia (SP-700) from 1917 to 1919.
Copied from  U.S. Navy Pictures World War I, page 101. US Naval Historical Center Photograph. Click on photograph for larger image. 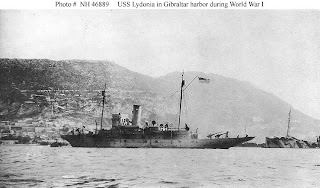 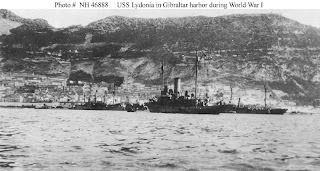 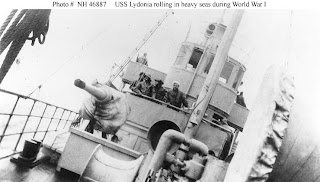 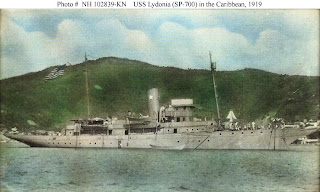 Figure 5:  USS Lydonia (SP-700). Reproduction of a color-tinted photograph taken while Lydonia was in a Caribbean port in 1919. Location is probably St. Thomas, Virgin Islands.
The star on her smokestack indicates that she was credited with sinking a German submarine during World War I. Donation of Fred Maidment, 2004. US Naval Historical Center Photograph. Click on photograph for larger image. 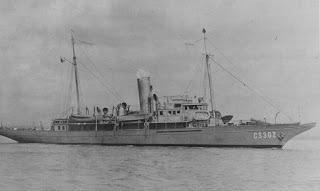 
The privately owned 497-ton steam yacht Lydonia was originally built by Pusey and Jones at Wilmington, Delaware, in 1912 and was acquired by the US Navy on 21 August 1917 from William A. Lydon. The ship was converted into a gunboat for use during World War I and was commissioned on 27 October 1917 as USS Lydonia (SP-700). The gunboat was approximately 181 feet long and 26 feet wide, had a top speed of 12 knots, and had a crew of 34 officers and men. Lydonia was armed with four 3-inch guns and two machine guns.
After being commissioned, Lydonia steamed to Bermuda where she underwent repairs and completed some target practice before undertaking the next part of her journey. On 18 November 1917, Lydonia and several other converted yachts left Bermuda and headed for the Azores. After enduring a very rough and stormy passage, Lydonia arrived at the port of Horta in the Azores on 5 December 1917. Two weeks later she arrived at Gibraltar and joined the American patrol squadron operating along the Atlantic and Mediterranean sides of the Straits of Gibraltar. Lydonia was given patrol and escort duties, but her primary function was to guard against German submarines.
While escorting Allied convoys in the Mediterranean, Lydonia was on constant alert for deadly German U-boats that were prowling around Gibraltar. During the early months of 1918, Lydonia made two separate attacks on German submarines while escorting merchant convoys, but she scored no hits. Then on 8 May 1918, while escorting a convoy from Bizerte, Tunisia, to Gibraltar, Lydonia made contact with another submarine. After the German U-boat UB-70 torpedoed and sank the merchant ship Ingleside, Lydonia, along with the British destroyer Basilisk, sprang into action. After making a coordinate depth-charge attack on the U-boat, Lydonia and Basilisk broke off contact to rescue survivors from Ingleside. Heavy seas prevented an immediate assessment of possible damage to the submarine, but records later indicated that Lydonia and Basilisk did sink UB-70. It was one of those very rare occasions when a converted yacht actually participated in and was credited with the destruction of an enemy warship.
For the remainder of the war, Lydonia continued escorting merchant ships from Bizerte to Gibraltar. After the war ended, Lydonia was ordered to return to the United States, arriving at Hampton Roads, Virginia, on 6 February 1919. Lydonia was decommissioned at Norfolk, Virginia, on 7 August 1919 and was transferred to the US Coast and Geodetic Survey that same day. Re-classified USCGS Lydonia (CS-302), the ship remained with the US Coast and Geodetic Survey until 1947. Her final fate is unknown, but the old ship was probably sold for scrapping.
In general, converted yachts didn’t make very good warships. They usually were slow, unreliable, prone to mechanical breakdowns, and poorly armed. But there is always an exception to the rule and Lydonia not only proved to be an effective warship and escort (assisting in the destruction of an enemy submarine), but also went on to have a long and useful career with the US Coast and Geodetic Survey. Not bad for a ship that started its life as a private steam yacht.
Posted by Remo at 9:48 AM