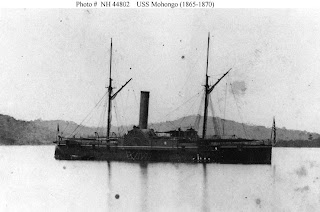 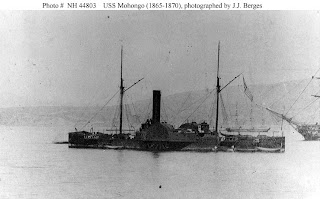 Figure 2:  Post-Civil War photograph of USS Mohongo taken by J.J. Berges in a Latin American port. From the collection of Charles Remey. US Naval Historical Center Photograph. Click on photograph for larger image.


Named after the wife of an Osage Indian chief, the 1,034-ton USS Mohongo was an Ashuelot class iron-hulled, side-wheeled, steam gunboat. Mohongo was one of the famous “double-enders” built during the Civil War, ships that were constructed for service on narrow inland waterways with a rudder on each end, enabling them to travel in either direction without having to turn around. The gunboat was completed by Zeno Secor & Company at Jersey City, New Jersey, and was commissioned on 23 May 1865. The ship was approximately 255 feet long and 35 feet wide, had a top speed of 13 knots, and had a crew of 190 officers and men. Mohongo was armed with two 100-pounder Parrott guns, four 9-inch Parrott guns, two 20-pounder Dahlgren guns, and two 24-pounders.

Mohongo left Brooklyn, New York, on 29 May 1865, shortly after the end of the Civil War. The new gunboat was assigned to the US Navy’s Pacific Squadron and sailed south. Mohongo made official protocol visits to various Caribbean and Latin American ports, steamed through the Straits of Magellan at the tip of South America on 9 October during a terrible gale, and finally arrived at Valparaiso, Chile, on 29 October. Mohongo remained there repairing her storm-damaged pumps and boilers until 27 April 1866, when she left for Callao, Peru. The gunboat arrived there six days later and joined Rear Admiral George F. Pearson’s Pacific Squadron in the midst of a Spanish blockade during the Peruvian War with Spain. Mohongo stayed at Callao with the rest of the squadron, protecting American lives and property from attack by either side, and then left on 21 May for a month’s journey up the coast of South America to Guayaquil, Ecuador, for a protocol visit.

Mohongo arrived at Panama at the end of June 1866 and on 6 August was assigned to Rear Admiral Henry K. Thatcher’s newly established North Pacific Squadron, which originally was part of the Pacific Squadron. The Pacific Squadron was divided into two commands because of the enormous areas of ocean that had to be patrolled by American warships. Mohongo left Panama on 20 November and stopped at Acapulco, Mexico, from 30 November to 28 March 1867, before steaming to the Mare Island Navy Yard in California for a year-long overhaul, which was completed on 15 April 1868.

On 26 April 1868, Mohongo sailed to Hawaii on a diplomatic and surveying mission that lasted until December. In 1869, the gunboat patrolled mainly along the west coast of Mexico. USS Mohongo was decommissioned on 29 May 1870 and was sold on 17 November of that same year. She spent the rest of her days employed as a merchant vessel.