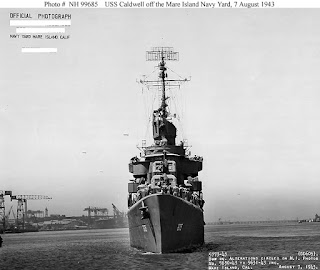 Figure 1:  USS Caldwell (DD-605) off the Mare Island Navy Yard, California, on 7 August 1943. Official US Navy Photograph, from the collections of the Naval Historical Center. Click on photograph for larger image. 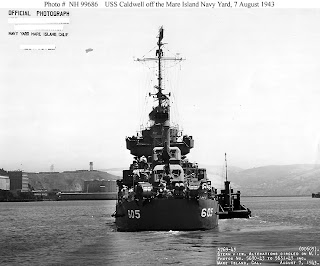 Figure 2:  USS Caldwell (DD-605) off the Mare Island Navy Yard, California, on 7 August 1943. Note barrage balloon in the upper left distance. Official US Navy Photograph, from the collections of the Naval Historical Center. Click on photograph for larger image. 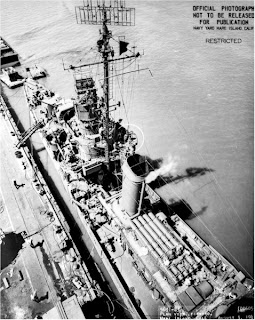 Figure 3:  Forward view of the USS Caldwell (DD-605) at the Mare Island Navy Yard, California, on 2 August 1943. US Navy photograph. Click on photograph for larger image. 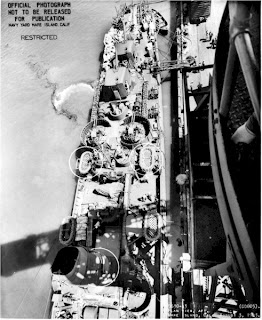 Figure 4:  Aft view of the USS Caldwell (DD-605) at the Mare Island Navy Yard, California, on 2 August 1943. US Navy photograph. Click on photograph for larger image. 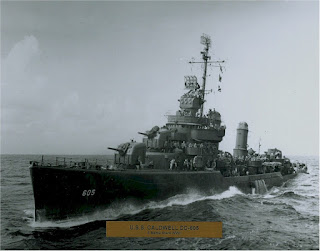 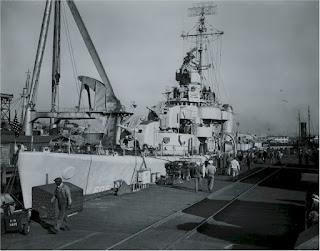 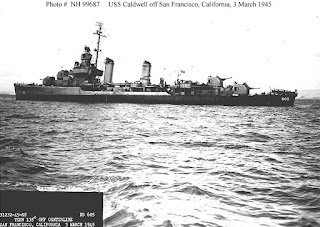 Named after Lieutenant James R. Caldwell (1778-1804), who was killed in action against the Barbary pirates at Tripoli, Libya, on 7 August 1804, the 1,620-ton USS Caldwell was a Benson class destroyer that was built by the Bethlehem Steel Company at San Francisco, California, and was commissioned on 10 June 1942. The ship was approximately 348 feet long and 36 feet wide, had a top speed of 35 knots, and had a crew of 257 officers and men. Caldwell was armed with four 5-inch guns, six 0.5-inch machine guns, ten 21-inch torpedo tubes, and depth charges.
In September of 1942, Caldwell was assigned to the northern Pacific, where she escorted convoys and combat forces to the US Aleutian Islands. Caldwell also participated in the American amphibious assault on Attu Island in the Aleutians in May 1943. In September 1943, the ship steamed south and joined aircraft carrier task forces in raids on Tarawa and Wake Islands. In November, Caldwell escorted landing ships for the invasion of Makin Island, which was part of the overall operation to take the Gilbert Islands from Japan.
After returning to the United States for a brief overhaul at San Francisco, Caldwell returned to duty and in January and February 1944 participated in the invasions of Kwajalein and Majuro in the Marshall Islands. During these amphibious assaults, Caldwell collided with the escort carrier USS White Plains (CVE-66). Caldwell managed to remain with the task force for a week before steaming to Pearl Harbor, Hawaii, for repairs. After being repaired, Caldwell took part in American naval strikes on Japanese bases in the central Pacific and New Guinea. For the rest of 1944, Caldwell was assigned to patrol and escort duties near the Marshall Islands and, later in the year, in the Philippines.
On 12 December 1944, while escorting landing craft in Ormoc Bay off the coast of Leyte in the Philippines, Caldwell was attacked by a number of kamikaze aircraft. One of the suicide planes smashed right into Caldwell’s bridge, just as two bombs exploded on either side of the ship. Caldwell was in serious trouble, with 33 men killed in the explosions and 40 wounded, including the ship’s commanding officer. But Caldwell’s after guns continued to fire on the remaining Japanese planes, chasing them away and forcing them to seek other targets. Extremely well-trained damage control parties on board Caldwell managed to save the ship, even though she was severely damaged.
Temporary repairs were made to Caldwell at San Pedro Bay, Leyte. The ship eventually managed to make it all the way back to San Francisco for a major overhaul. In April 1945, Caldwell returned to the Pacific battle zone and spent the next few months assigned to escort duty. After that, she became part of the invasion force given the task of re-taking Borneo from the Japanese. But on 27 June 1945, Caldwell struck a mine in Brunei Bay off the coast of Borneo. Fortunately, the ship escaped with moderate damage and no casualties. After temporary repairs were made at Victoria, Australia, Caldwell steamed to San Pedro Bay for more permanent repairs. The ship was docked at the Philippines when hostilities ended in the Pacific in August 1945.
During the first two months of the post-war era, Caldwell escorted landing craft in the western Pacific and then returned to the United States. Caldwell was sent to the east coast and on 24 April 1946 was decommissioned at Charleston, South Carolina. For the next 20 years, she remained in the US Navy’s Atlantic Reserve Fleet. The destroyer was sold for scrapping in November 1966. USS Caldwell received eight battle stars for her service during World War II.
Posted by Remo at 8:14 AM