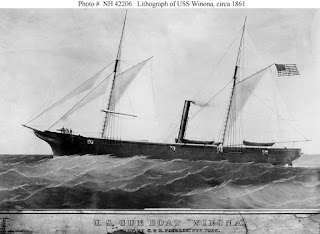 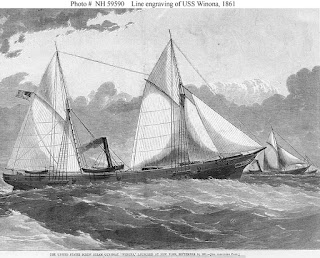 Figure 2:   Line engraving of USS Winona published in Harper's Weekly, 28 September 1861, depicting the anticipated appearance of the gunboat when completed. She had been launched on 14 September 1861 but was not commissioned until 11 December 1861. US Naval Historical Center Photograph. Click on photograph for larger image. 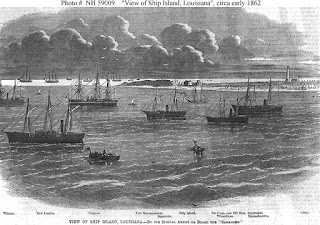 Figure 3:  "View of Ship Island, Louisiana. -- By our Special Artist on Board the 'Sagamore.'" Line engraving, published in Harper's Weekly, 1862, depicting several US Navy ships anchored off the federal base at Ship Island in early 1862. Ships are (from left to right) Winona, New London, Niagara, Sagamore, Wissahickon, and Massachusetts. Other features identified, in the center and right background, are Fort Massachusetts on Ship Island, the 9th Connecticut and 22nd Massachusetts Regiments and a military camp. US Naval Historical Center Photograph. Click on photograph for larger image.

Figure 4:  "Reconnoissance of Forts Jackson and St. Philip, on the Mississippi, by Gun-boats from Flag-officer Farragut's Squadron.” Line engraving published in Harper's Weekly, 1862, depicting the attack on the obstructions below the forts, 20 April 1862. US Navy gunboats shown in right center are Itasca and Pinola. Further to the right are Kennebec and Winona. Fort Jackson is shown at far right, with Confederate gunboats beyond. US Naval Historical Center Photograph. Click on photograph for larger image. 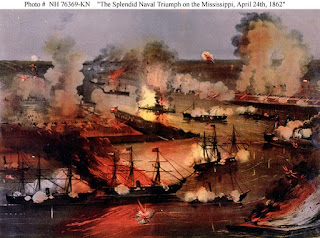 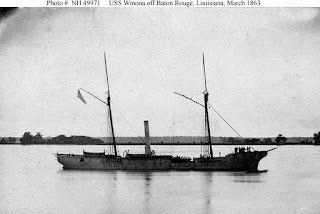 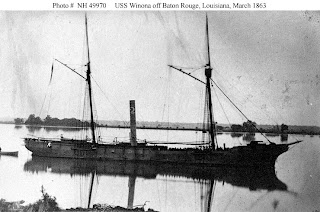 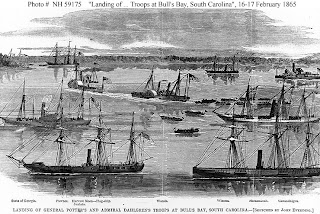 Figure 8:  "Landing of General Potter's and Admiral Dahlgren's Troops at Bull's Bay, South Carolina." Line engraving, based on a sketch by John Everding, published in Harper's Weekly, March 1865, depicting the landings made on 16-17 February 1865. Ships shown include (as identified below the print, from left to right -- all US Navy): State of Georgia, Pawnee, Juniata, Harvest Moon -- flagship, Wando, Winona, Shenandoah, and Canandaigua. US Naval Historical Center Photograph. Click on photograph for larger image.

Named after a town in Minnesota, the 691-ton USS Winona was a single-screw steam gunboat that was built by C. & R. Poillon at New York City. Because of the start of the Civil War in America in April 1861, the Union Navy was in desperate need of warships, especially gunboats, for its naval campaign against the Confederacy. As a result, ships were built rapidly in the north to fulfill this need. Winona was launched on 14 September 1861, delivered to the US Navy at the New York Navy Yard on 26 November, and officially commissioned into the Navy on 11 December 1861, roughly 90 days from when it was launched. The ship was approximately 158 feet long and 28 feet wide, had a top speed of ten knots, and had a crew of 114 officers and men. Winona was armed with one 11-inch gun, two 24-pounder guns, and two 20-pounders.
Winona was sent to the Gulf of Mexico in December of 1861. She participated in the Union Navy’s operations against Confederate defenses on the Mississippi River below New Orleans, Louisiana. On 24 April 1862, Winona attempted to pass Forts Jackson and St. Philip at the mouth of the Mississippi, the two main Confederate forts defending New Orleans. Winona, though, got snagged on an obstruction in the river while the rest of her unit fought its way past the Confederate forts on the river banks. Winona eventually broke free of the obstruction, but remained below the forts with Union Commander David Dixon Porter’s mortar boat flotilla as Flag Officer Admiral David Farragut’s fleet moved up the Mississippi to capture New Orleans. Four days later, Winona’s commanding officer took part in accepting the Confederate surrender of Fort St. Philip.
In May 1862, Winona steamed up the Mississippi River with Admiral Farragut’s fleet and joined in the bombardment of the Confederate stronghold at Vicksburg, Mississippi. Winona twice sailed past the Confederate batteries at Vicksburg and bombarded enemy positions at Grand Gulf, Mississippi. The Union gunboat also briefly fought the Confederate ironclad CSS Arkansas on 15 July 1862, but neither ship was seriously damaged.
In late August 1862, Winona joined the Union blockade of Mobile, Alabama. On 4 September, while on blockade duty, Winona fired on the Confederate raider CSS Florida as that ship made a daring run into Mobile Bay. Unfortunately for the Union warship, Florida got away and made it to Mobile. Winona then returned to the Mississippi River, where she was damaged in action with Confederate artillery on 14 December. After being repaired, Winona returned to duty and from April to July 1863 was involved in the Union campaigns against Port Hudson, Mississippi, and Vicksburg. Winona also assisted in repelling a Confederate attack on the Union position at Donaldsonville, Louisiana.
Winona was under repair and being overhauled at Baltimore, Maryland, from August 1863 to February 1864. She then became part of the Union’s South Atlantic Blockading Squadron, operating along America’s east coast from South Carolina to Florida. Among her exploits were the destruction of a Confederate blockade runner in March 1864, attacks on Southern forts near Savannah, Georgia, and participation in a Union amphibious landing at Bulls Bay, South Carolina, in February 1865.
After the Confederacy surrendered in April 1865, Winona was sent north and decommissioned on 9 June. Laid up first at the US Navy’s Portsmouth, New Hampshire, Navy Yard, Winona was moved to the New York Navy Yard in New York City on 22 November. The ship was sold at New York on 30 November 1865 and subsequently became the civilian cargo vessel C.L. Taylor. She remained in civilian merchant service for at least another two decades. Not a bad career for a warship that was built in roughly 90 days.
Posted by Remo at 8:04 AM